Few things are more satisfying than the “whoosh” of a model rocket launch. Here’s a video from earlier this year with my Estes Saturn V:

A key question I get about model rockets is “How high do they go?”

Well, good question. If I was a trigonometry nerd, I could figure that out using a string, protractor, another adult, a measured fixed distance from the launch pad, and SOH-CAH-TOA, then I could tell you. But since that situation is hard to come by, the easier method is to use an electronic altimeter. While vendors on the market (such as Estes, Perfectflight, Jolly Logic) have pre-built altimeter options, I often appreciate the value in building my own. Plus, it would give me an excuse to tinker with Arduino code and sensors myself. Lastly, in my research, I came across several others (One, Two, Three, Four) who built their own altimeters, so I was inspired! Let’s get started!

The data logger was based on an Arduino Mini Pro, with a LiPoly 2 cell battery, a GY-86 Instrumentation Unit (barometer, gyroscope, etc.), a micro-SD card reader, and a voltage regulator for taking 7.4V from the battery and smoothing it to 5V needed for the computer chips. 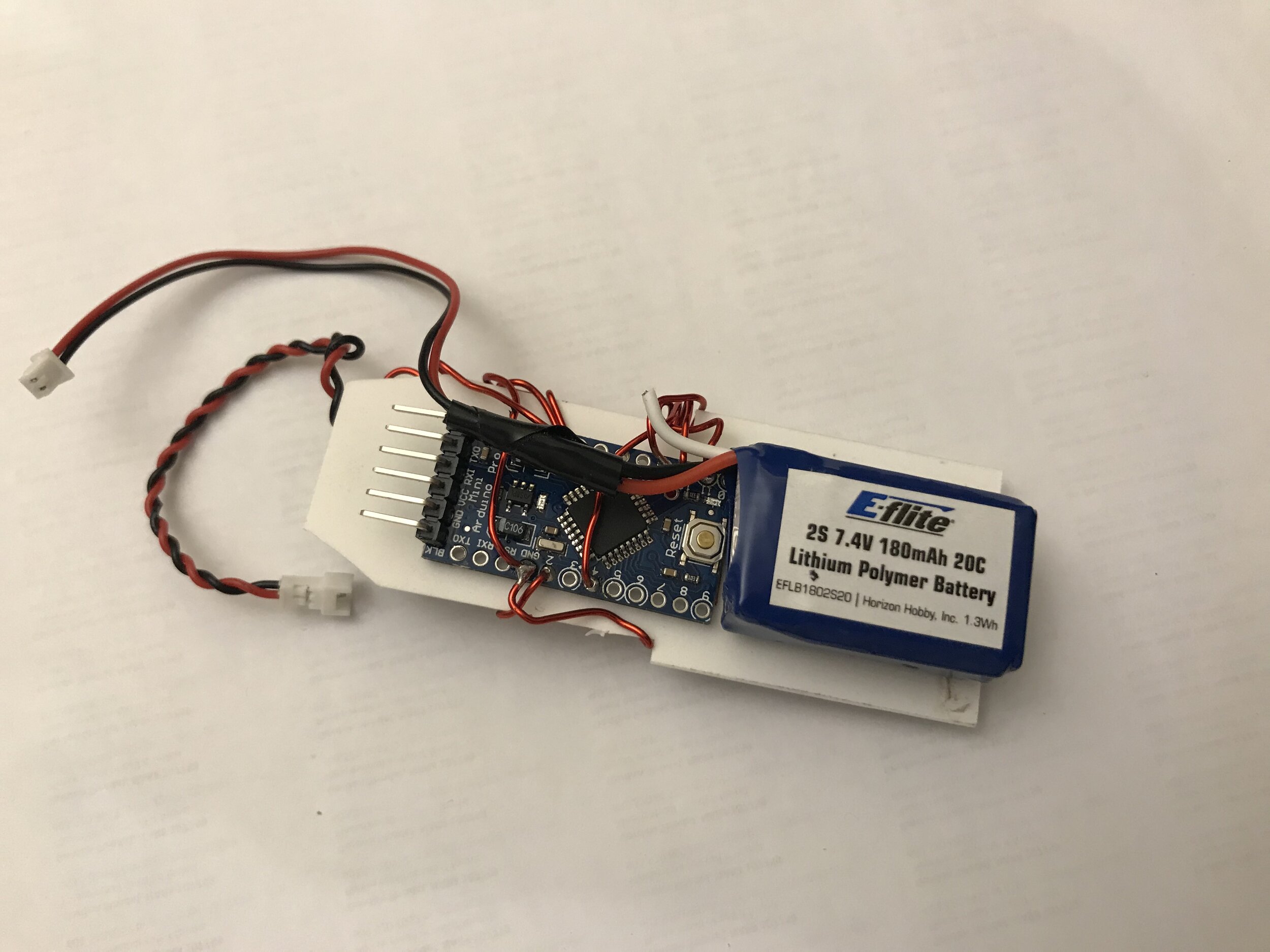 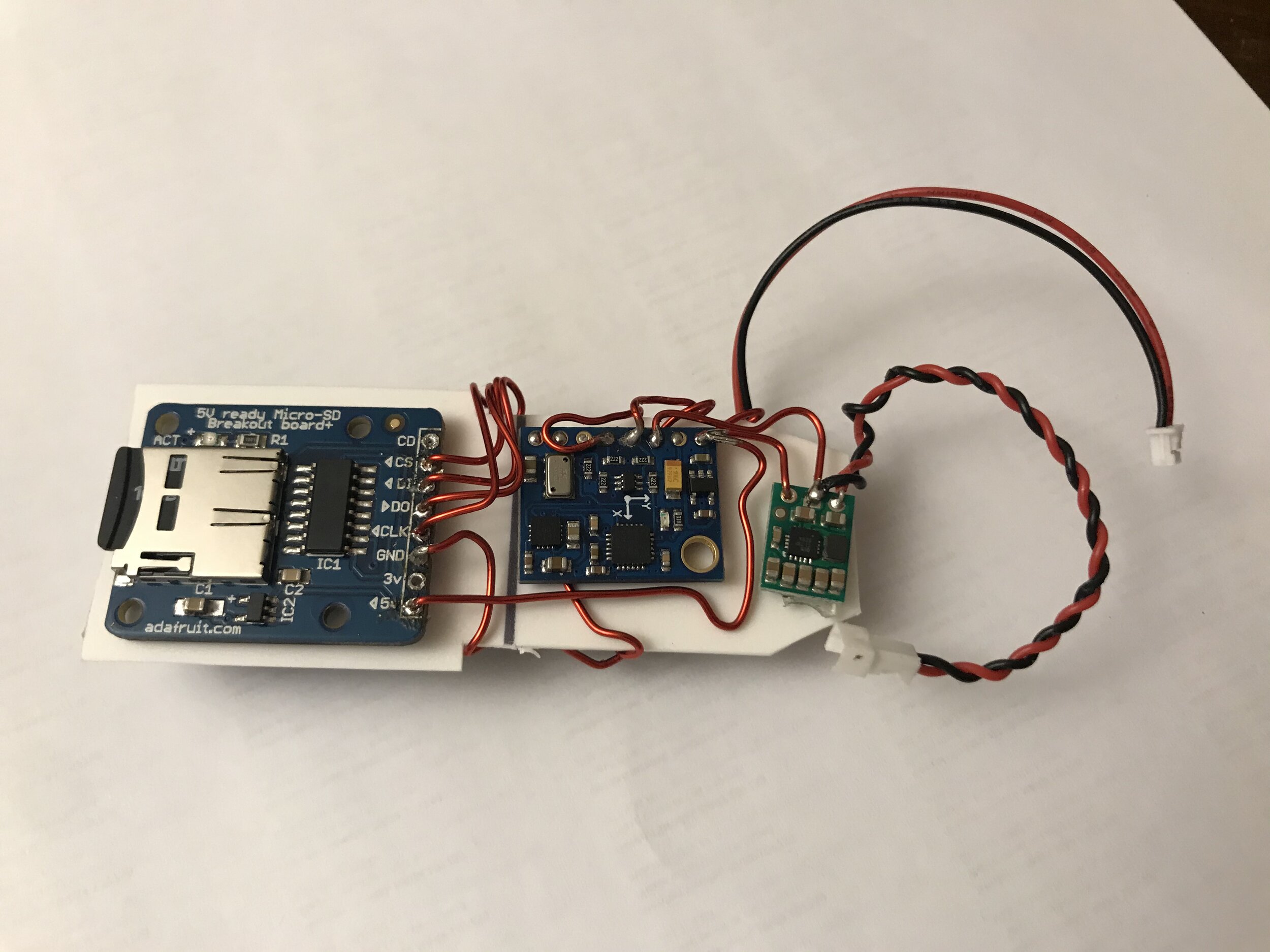 Wiring it all together

NOTE: Pay careful attention to the orientation on the GY-86. There is an XY-axes printed on the silkscreen, make sure that points toward where the nose-cone will be when it sits in the rocket!

Flash the Arduino just like you normally would with the IDE. (Arduino has a getting started guide if you are new to this.)

If the wiring works , then there is a red LED that blinks rapidly on the SD card reader when the SD is being read/written and the code is running on the chip. The IMU has a green LED that remains lit. The Arduino Mini also has a red LED which blinks. After a 1/2 second calibration, the sketch begins to log data to a text file on the SD card. The file will contain header-less data looking like this:

Preparing the Data for Tableau

The raw data from the altimeter was captured in CSV on an micro SD card without headers. Luckily, I specified the format of the output in the Arduino code.

For each flight, the data logger appends the results to the existing “DATALOG.txt” file on the SD card. To make my life a bit easier and verify the altimeter was working, I downloaded the file after each flight. I then later split the files manually using the “Milliseconds” indicator of when a new flight started. Once you have it split into three files, I used Tableau Prep to clean and recombine the files into a CSV for my Tableau Workbook.

Since the data was raw, I had to apply a few transformations: 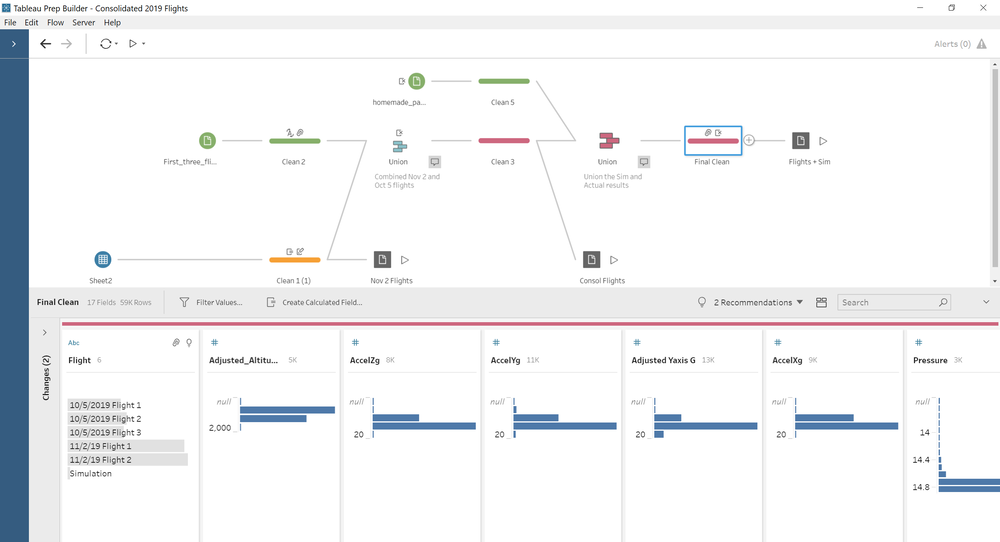 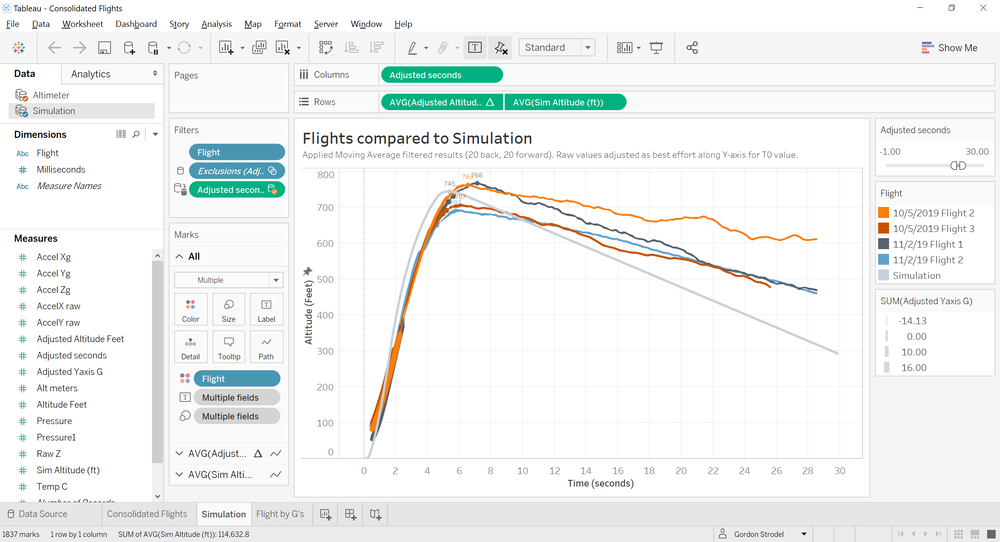 The following Tableau Public visualization shows some of the results of the flights. Note, the first flight on 10/5 was on a C-class motor, which is 1/2 as powerful as a D-class motor, hence the reduced altitude on that flight.

Note: Since the altimeter data was so wiggly, I put a Moving Average table calculation on the raw data. This essentially gave me a smoother RMS-like value across the raw values. (I used 20-points forward and 20-points backwards as part of the moving average.)

In comparing the simulation to the captured data, there are a few noticeable points for variance: